Keep Calm and Bonk on

Keep Calm and Bonk on @wartranslated in NAFO fundraise for 2 Ukrainian units in Bachmut and  Marinka. 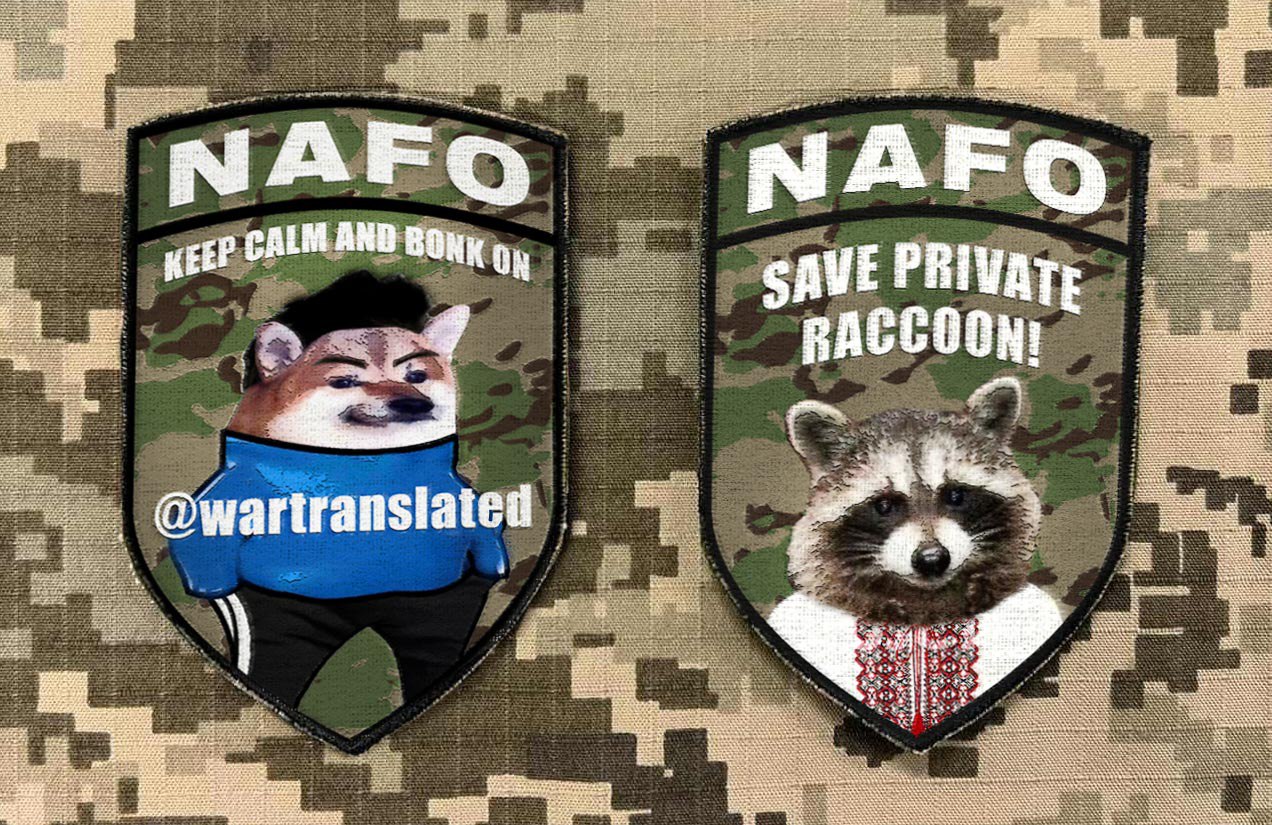 69th Sniffing Brigade and Dmitri @wartranslate are equipping 2 brigades fighting in the Donetsk region for 32 370€.
Possible donations:
‍
From €100: 1 patch.
From €200: 2 patches.
From €1,000: 2 patches + your text on the vehicle (max 3-4 short words, max 30 characters.)
Process:
‍
Step 1: Make your donation.
Step 2: Request the patch by filling this form.
Step 3: we will deliver your Patches anywhere in the world.
Info: For additional information please contact Dimitri

Request a Patch After Making a Donation

69th Sniffing Brigade and Dmitri @wartranslate are equipping 2 brigades fighting in the Donetsk region for 32 370€. To raise funds for this, we are releasing a limited collection of NAFO patches: “Save Private Raccoon” and “Keep Calm and Bonk on @wartranslated”.

Who is getting the NAFO support?

The guys are now fighting in Bakhmut, the worst hell on Earth. The most serious issue is one of transportation. Their vehicles are in disrepair. The guys are holding at zero. As a result, you must move rapidly and jump out of moving cars in order to reach the trench. We intend to bring them a €13,000 2009 Toyota Hilux pickup truck. This is the current situation of their vehicles:

The artillery is the second issue. Artillery is the war god. That is why the Russians are continually firing and have no spare ammunition. We heard from Igor from 21 battalions several times that he was shell-shocked. The shot went 5 meters away from him; he amazingly survived, but he couldn't fight since he was stunned and disoriented. We chose to assist them by donating 212 € in the form of Sordin Supreme Pro X Led dynamic headphones. There are ten solders in a shift, therefore the total is 2120 €.

The third issue is the enemy's location. Because the enemy is only 50-300 meters away, it is nearly hard to get out of the trench and observe what is going on. There was a moment when they were targeted with machine gun fire. And the guys had to sit for hours because they couldn't figure out where the shooter was. To solve this gap, we want to provide them with a 28x zoom Mavic 3 fly more combination drone worth 2150€. Then one of the brigade members will serve as a pilot and coordinate the rest of the fighters.

The fourth issue is one of communication. The person in the front of the walkie-talkie was holding gold. For their shift, they have one walkie-talkie. And we believe we require three more. One will go to a man with a drone, while the other two will be split among the trench warriors. Another advantage is that the walkie-talkie may be attached to headphones, making squad communication much easier. To do this, we purchased a MOTOROLA DP4400E MOTOTRBO RADIO VHF valued 700€, for a total of 2100€.

The guys are currently howling in a similarly awful situation - Marianka. They are in in need of a new vehicle, as theirs has become unusable:

The guys had a poor fundraising experience. They gathered money for one pickup, delivered it to some scammers, who promised them the pickup, and the money is no longer there.

Campaign ends on 18th of January or as soon as we collect needed funds.

More than 120 cars have been transferred to the defenders of Ukraine as of this point in time. It is quite challenging to express the mood that prevailed throughout the convoy. In all honesty, you can only experience it for yourself. On the other hand, we have produced a video that provides a rough overview of this journey:

I want to say a HUGE THANK YOU for the most laughable community in the world - #NAFOfellas !
69th Sniffing Brigade has a secret network in different 26 countries! pic.twitter.com/oehNjArBHI

Everyone who makes a donation can send a text for a Christmas postcard. Volunteers in Tallinn will decorate beautifully in your native language and attach a Ukrainian translation to each postcard.
The main task of the NAFO operation "SECRET BioLabs" is to turn the situation on the left photo into a situation on the right one! 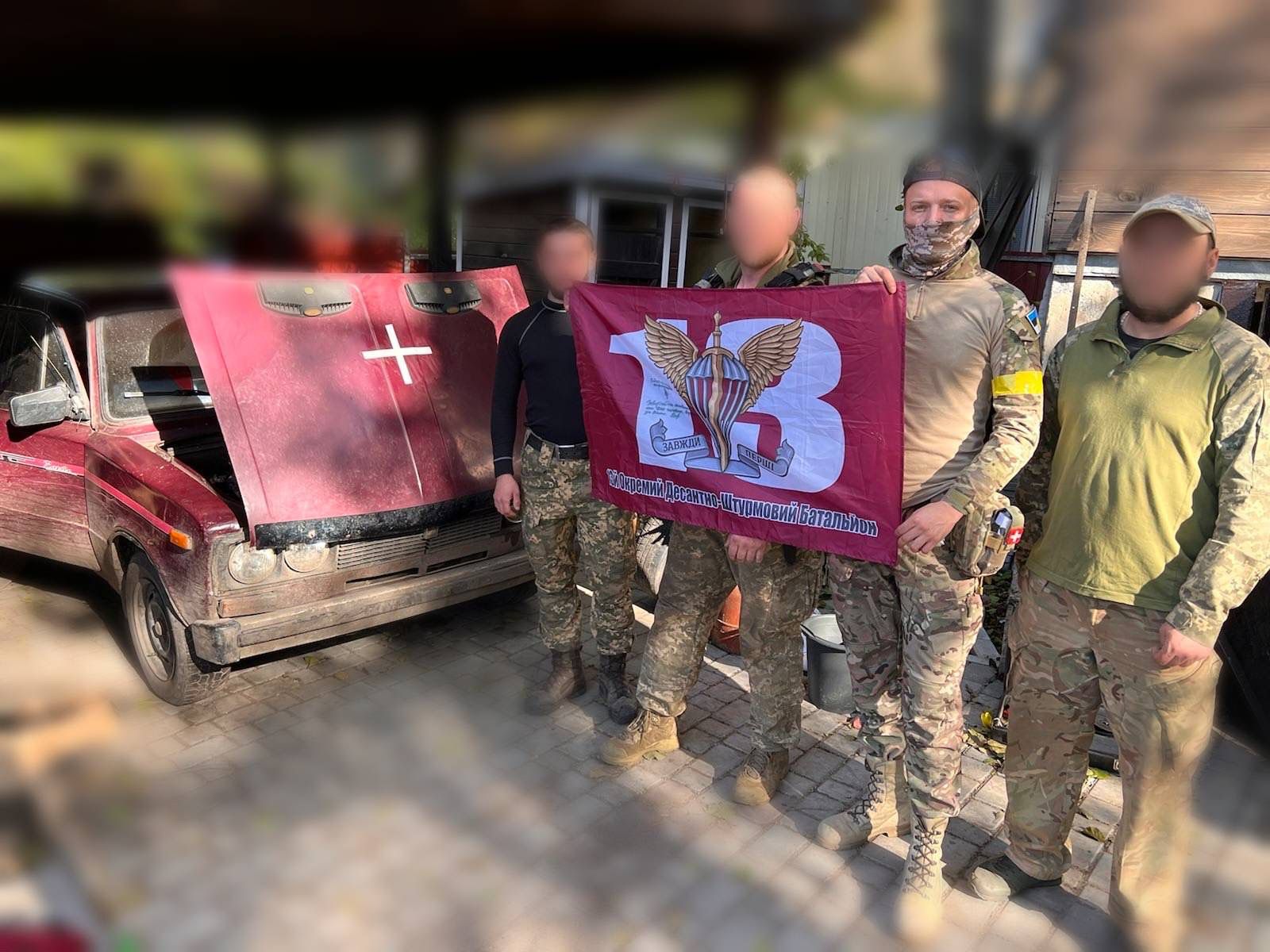 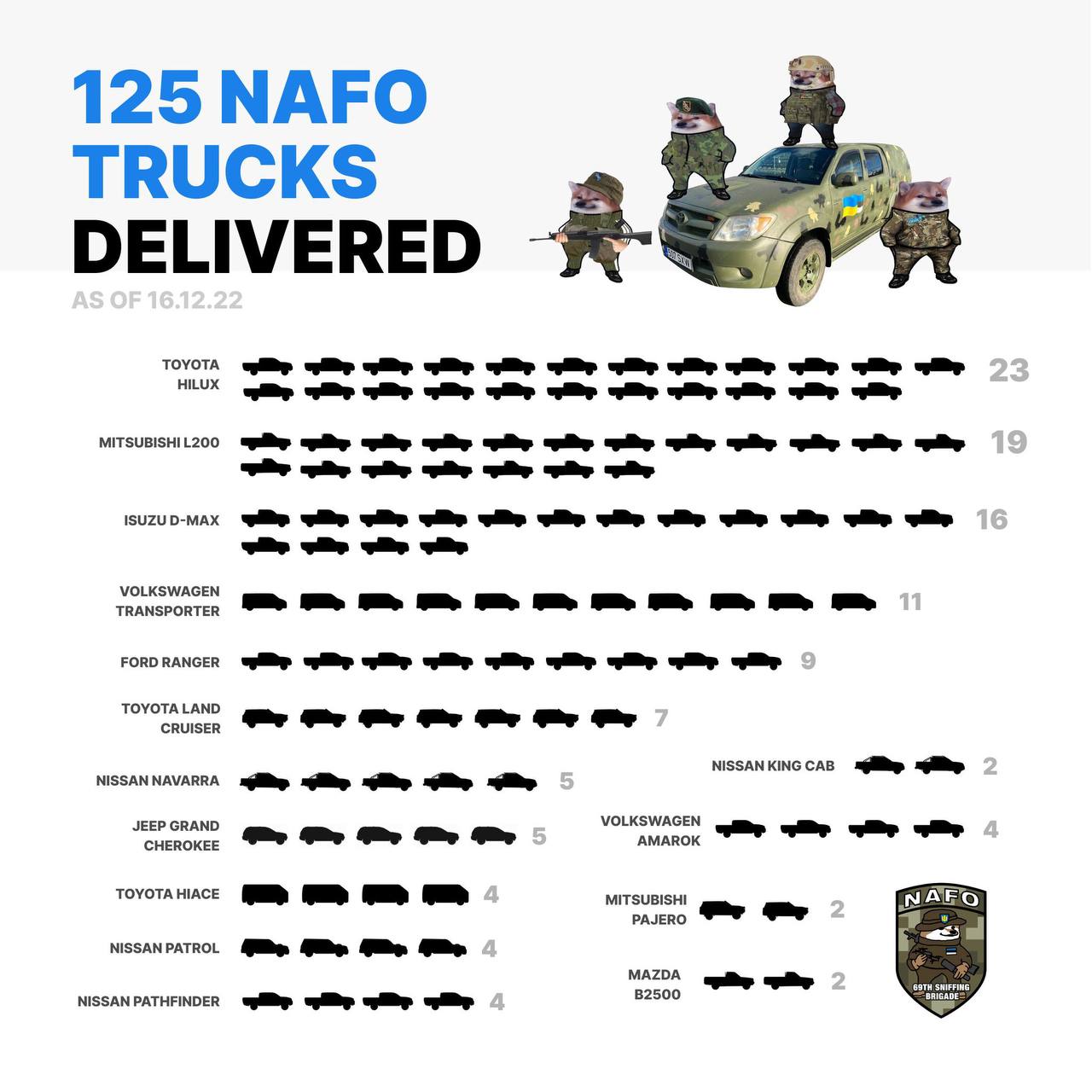 DonateRequest a Patch After Making a Donation